Special fields called paddies are formed to grow rice in Japan. To flood the field with water for the first part of the growing season paddies have layers of different kinds of soil. The paddies are surrounded by a raised dike or embankment about two or three feet high. Traditionally, paddy fields were quite small.

In Japan the main form of rice cultivation is through growing it in paddies. In Japan, rice farmers also take advantage of small, terraced paddies built into the inclines of mountains since it has many mountainous regions and few plains. The main method in Japan is to plant seedlings in the paddies, Unlike the large-scale rice cultivation in the West, where the seeds are directly sown into the soil. The rice plants are carefully looked after with painstaking management of the water and fertilizer, weeding, and so on, from paddy-planting in spring to harvest in the autumn.

To follow the contours of the land, they often had an irregular shape. To open to let water flow in or out of the paddy, and close to hold the water in place Every paddy field has simple devices. To bring water to the paddies all the paddy fields in an area are connected to neighboring paddies and a network of ditches links them to a stream or canal. By determining when the water will flow into each paddy field to flood it the farmers in one village, and sometimes in several neighboring villages, have to coordinate their rice planting with a schedule . 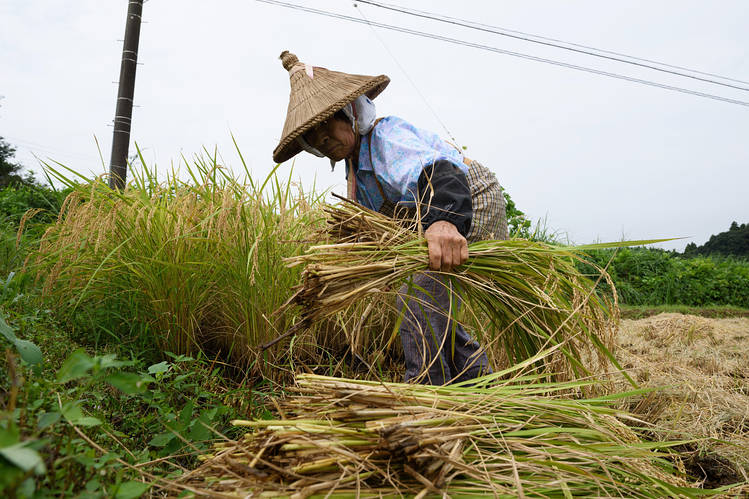 In lowlands and terraces on the slopes of hills and mountains of Japan, Wet rice is grown in paddies. With the water that originates above where the rice is grown is used to irrigate most rice paddies and terraces. Water from one paddy drains into another paddy in most cases in Japan. Only when the soil is dry rice has to be harvested. Consequently the water must be emptied from the paddy before the harvest and when the new crop is ready to plant filled up again.

To transport water to and from the paddies, a typical paddy system consists of a holding pond and a network of canals, ditches and wooden or bamboo conduits. The holding pond collects water that seeps naturally from the surrounding hillsides and is usually at the head of a valley. The water is carried down slopes in narrow ditches to run alongside the paddies from the holding pond. To ensure the flow of water into paddies, these ditches are always kept at a level slightly higher than the paddies.

Dikes are built around the fields to keep water in the paddy. Along the ditches simple sluice gates, often comprised of a thick board and a few sandbags are set up at intervals. By opening and closing these gates the amount of water entering a paddy can be regulated. A drainage canal usually runs down the center of the valley. Concrete-sided canals, water pumped from underground sources and abandonment of holding ponds are the new innovations in paddy fields.

A rice paddy is also very labor intensive maintaining. Men's work has traditionally been shoring up the dikes and cleaning out the irrigation systems while for women planting and weeding has traditionally a job. Some knowledge of hydrodynamics is necessary to make sure the water is directed where it needs to go.

When spring draws near, to prepare them for planting farmers plough and irrigate the paddies. At the same time of preparation of fields, cultivation of the seedlings to be planted in the paddies begins. The seeds are transplanted to the muddy soil of the paddy after the seedlings have been grown in a plastic greenhouse.

In summer, the seedlings begin to grow into young rice plants. The base of the root grows large and round as they separate into stalks at the root. On one day the summer, blossoming for around one hour, small white flowers will appear. Once pollinated, the flowers will close. And over the course of 40 days the plants create seeds which are rice.

When autumn is near, in the drained paddies the ears of rice plants gradually store nutrients in their seeds. The ears hang heavy under the weight of the rice in the husk when it is Close to harvesting time. When the golden
ears of rice bend over in the autumn breeze the harvest begins.

The paddies are sometimes used for off-season crops such as barley or vegetables until the spring, after the rice has been harvested. The paddies are left fallow until spring in snowy areas. As the snow falls and piles up, the paddies wait for the coming season. 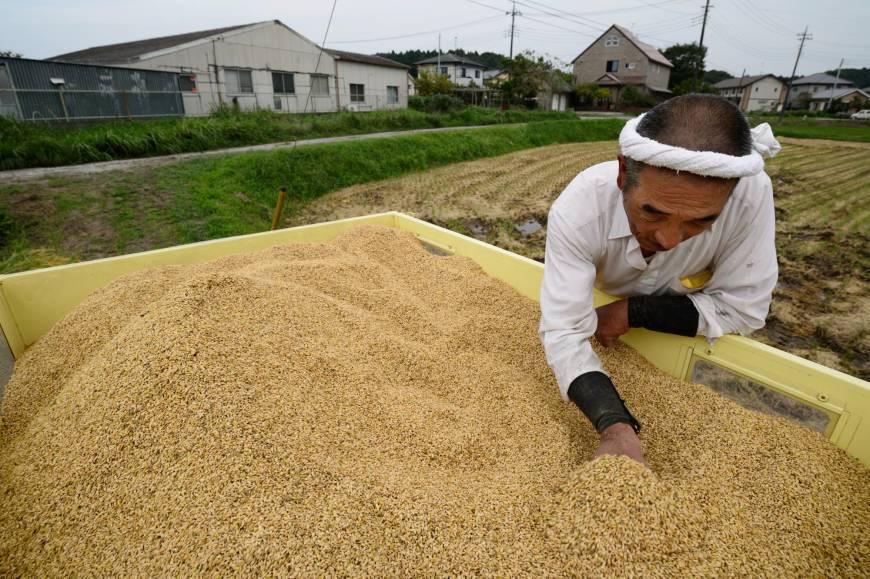