Overall Japan has a shrinking agricultural sector as the farmers count keeps on declining. The number of full-time farmers at 1.7 million in 2014, declining from 2.2 million a decade earlier which is shown by a government data. By the lack of young people becoming farmers, workforce and skills shortages are compounded.

Since1985 over the last several decades, Japan’s farming population has been decreased by around 60% so that the average age of farmers has keeps on steadily increasing. Against this backdrop, now there is a severe labor shortage in the agricultural sector.

The Ministry of Agriculture, Forestry, and Fisheries in its census conducted in 2015 on the agriculture and forestry industries founded that there were 2.09 million people engaged in agriculture. Compared to three decades earlier 11 million in 1965 this represents a decrease of 60%. For the first time the figure of the number of people who primarily earn their living from farming has fallen below 2 million which is now at 1.75 million. 63.5% were aged 65 or older among those who primarily engaged in agriculture. This is 3.3 times more than 30 years ago.

At the time of the 1985 census, 5.42 million people were under the farming population in Japan. That number has dropped steadily in each of the subsequent censuses, conducted every five years, so that the statistics chart looks like descending staircase. Since those primarily engaged in agriculture has been narrowing, there is still a severe labor shortage. This labor shortage has been steadily weakening the production base for agricultural products. 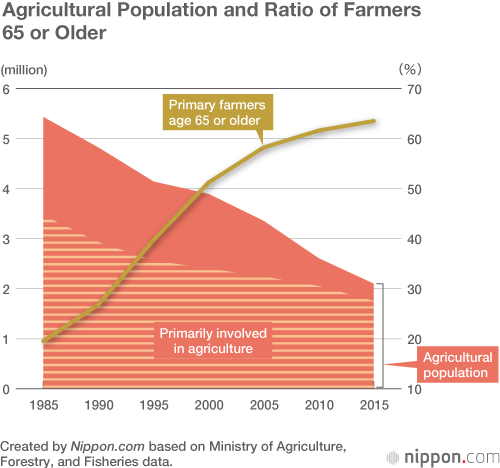 According to the 2015 census, the average age of people particularly advanced in the highland and mountainous regions of Japan, primarily engaged in agriculture has increased by 7.2 years over the last decade to 67. The situation is where over 70% of farmers are aged 65 or older. The reason in the growing number of fallow and abandoned agricultural fields around the country is that the increasing age of farmers and subsequent decrease in labor input is considered a key factor. This has raised a concern about farming areas going to ruin.

Japan’s aging population and low birth rate has produced a labor shortage that is being felt in many industries and it will not be easy to attract new farmers. In response to that, the government is considering introducing a new five-year visa for overseas workers in certain sectors. This 5 years visas is a bid to increase the number of foreign laborers in agriculture and other core industries.

Moreover, farming is dominated by the elderly people occupation: 6 in 10 farmers in Japan are over the age of 65. And the people who do farming as a full-time profession is becoming a thing of the past.

If farming as a profession has lost out to other jobs, and as elderly farmers die and aren’t replaced, the number of farmers lacking will become as the key issue for food shortage.

Jos Verstegen, a researcher at Wageningen Economic Research in the Netherlands and a visiting professor at Miyazaki Sangyo-keiei University  says that the way how Japan tackles food self-sufficiency, cultural heritage and vitality of its countryside villages through agriculture is of particular concern and it is unique. 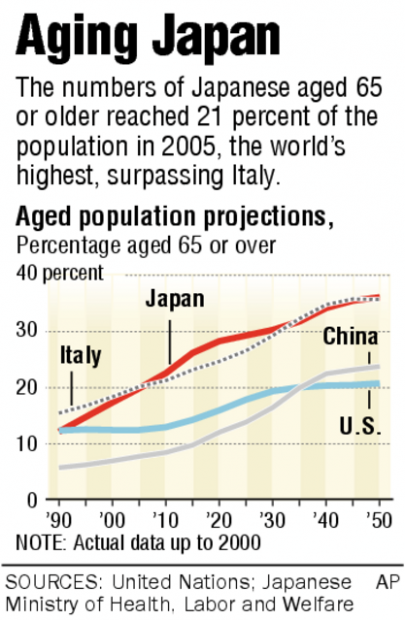 In the late 1950s and early 1960s, Japan’s half of the population lived in rural areas near mountain valleys and among that half of all the households have farmed. In 1950, the report says that there were over 6 million farm households in Japan. Even then, due to poor farming conditions about half of farm household members farmed only part-time. During the off-season a practice called dekasegi is followed where they would go off to do other kinds of work,. As Japan’s economy recovered in the 1950s young adults left their farm homes to take jobs in the cities and Japan entered the period of high growth. Among those young people moved to cities many never returned, leaving no one to take over the family farm. Due to the increased population in the cities the nearby villages turned into suburbs as houses and apartments sprang up in farmers’ fields. Expanding cities and faster train transportation made it possible for more farmers to continue to farm part-time and to to work at urban jobs.

Since the average farmer is aged over 66 and the farming sector’s contribution to the economy has fallen by 25%, Prime Minister Shinzo Abe pushes to reform Japan’s hidebound farm industry where small-plot holdings still dominate. The farming economy was peak at 1984.

The number of company running farms have jumped from 8,700 in 2005 to 20,800 last year and Japan is already seeing a shift towards it. The farm industry has increased their employee under age of 49 around 23000 last year which is 18000 five years ago. This shows that the young people in farming are increasing.