Problems of Agriculture in Japan

The two major agricultural areas of Japan are Miyagi prefecture and the city of Sendai on the east coast and Niigata prefecture and city in the western part of the country. The climate in Japan ranges from with abundant rainfall, hot summers, and relatively mild winters. By geography it is temperate in the north to semi-tropical in the south.

Farming is possible in many places in Japan. When it comes to large scale farming however, there’s a matter of space. Farmland is scarce in Japan that is only 12 percent of total area. Japan is a small country, with most of its land being mountainous which is about 70%. And because Japan is an island country farming is greatly affected by currents which causes severe typhoons and rainfall. These obstacles has a great impact on mass agricultural production. Therefore, Japan is dependent on imported crops and products from China and the USA.

There is a say that Japan’s agricultural sector has long been a model of inefficiency based on factors of tiny farms burdened by heavy regulation, influenced by government subsidies and protected by a various set of tariffs and import controls. Though food in Japan is in abundant and quality is too good, prices paid by Japanese consumers is twice as much as those available in other countries. 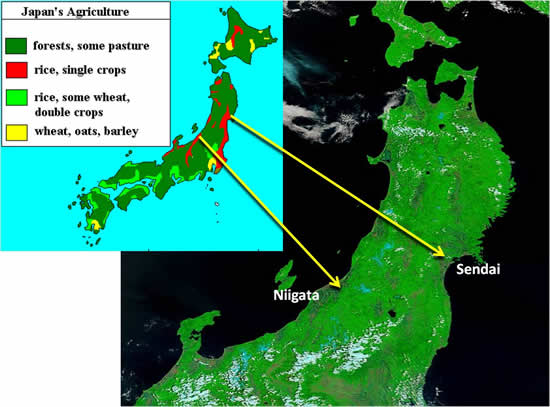 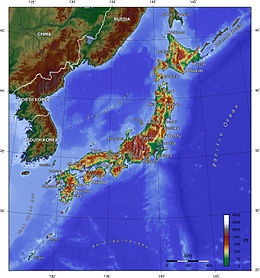 According to the Ministry of Agriculture, Forestry and Fishing of Japan, the number of Japanese primarily making farming as profession has dropped to 1.7 million in 2014 from 1.86 million in 2011. It states that in 2014 about 515,000 farmers were 75 years or older. By comparison with previous data, only 83,000 were 39 years old or younger and that number was reduced by 7,000 from past three years of data. Mostly 6 in 10 farmers in Japan are over the age of 65, and people doing farming as a full-time profession is constantly decreasing comparing to the past.

Choe Okuno, president of JA Zenchu, which is one of the Japan’s largest farm cooperative said that the age of farmers who are actively doing agriculture are above 66 years old which is being a serious issue. If this continues the average age would become 70 years and that will be an end to Japan’s agriculture. 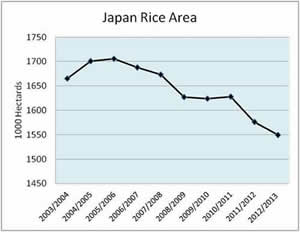 Meanwhile with high risk of farming, for the farm production from the contaminated areas the government has set precise testing requirements and radiation standards that must be met before the products will be allowed on the market. To reform agricultural lands, the clean-up is proceeding very slowly and thousands of hectares of farmland is still a problems to farmers. In the Chiba prefecture which is next to Tokyo, farming is declining as farmers are growing up in age and the number of abandoned plots of farmlands keeps increases.

Only 20% of Japan's land is suitable for cultivation of crops, and the agricultural economy is highly subsidized with more facilities. Rice paddies are grown in most of the countryside, which can be on the alluvial plains or the terraced slopes or wetlands and coastal bays. Non-paddy farmland which is suitable for vegetables share the terraces and lower slopes. These area are planted with wheat and barley in the autumn and with sweet potatoes, vegetables, and dry rice in the summer. Intercropping is common in these areas with such crops are alternated with beans and peas.