It is an interesting Japanese story of two frogs, in which they are very much fascinated about each other places Osaka and Kyoto. let's know what happened to them and their plan to visit.

Some time ago in Japan, there lived two frogs, one in a ditch on the sea coast nearby Osaka and the other in a small stream flowing through the city of Kyoto. They were strangers to each other, but surprisingly they both wanted to explore the world a little having the same idea in mind. The frog at Osaka wanted to visit Kyoto and the other in Kyoto explore Osaka.

Finally in the spring, one fine day they got all their things ready and started walking towards destination from their places. It became a bit tough than expected their journey was, as the way was unfamiliar to both of them. Upon moving halfway between the two towns, there arose a mountain which has to be climbed in order to reach their journey's end. After many hops, they reached the top facing off each other. 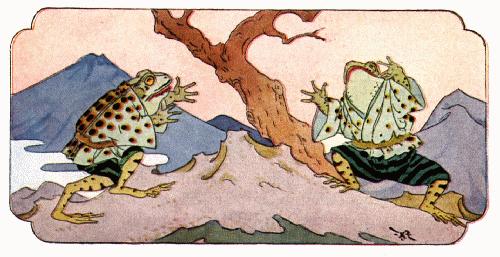 They fell into conversation after looking at each other for a while, talking about their journey from home. It was pleasant for both of them that they have the same wish to know a little around. As there was no point of a hurry they relaxed in a fine place and admitted that they had a good time.

Osaka frog said, sad! We are not taller; we could see both towns from here by then and tell me if it is worth moving further.

“We can do that easily” the Kyoto frog replied. For that, we have to take the support of our hind legs and hold each other to have a look at the towns.

They both agreed and with the help of front paws holding the shoulder of other tightly, they both stood in full stretch. The Osaka frog facing towards Kyoto and the Kyoto frog towards Osaka, but the two silly frogs failed to notice that their eyes are towards the places they had come from and accepting that they were looking at the places they wanted to go.

“Kyoto is looking same as Osaka and nothing is new to see there and I will go home now” yelled the Osaka frog.“I may not travel up to here if I have had any idea that Kyoto is same as Osaka” uttered the Kyoto frog and both of them took their paws from other’s shoulders. They fell down on the grass, took farewell from each other and began their journey to their home thinking of that Osaka and Kyoto are two different cities by their names but look-alike two peas in a pod.