There are many Japanese Folk tales which narrates moral values in once life, one of them is "The two daughters" very interesting and adds a godd lesson in once life lets explore it together.

There lived a gentleman with his two daughters at Akita, Inaba province, he had divine thought through his daughters. He was a prowl by profession and has had the habit of shooting with a gun. He more often committed the sin of taking life. He never listens to the words of his daughters. They feared that his sins will affect his future and were trying to get rid of that. Their tears flowed for him. Finally, after some days he had been heard so earnestly by his daughters he promised not to go hunting anymore. Days passed, then come some of his neighbours requested to shoot two storks. As he was very familiar with the work, without any further delay he agreed to do. Taking care of his daughters not to let them know the subject, he went out with a gun in his hand that night thinking that they fell asleep.

However, they had heard everything and came to an end that, “there will be no change in his father’s attitude, at least by sacrificing one of our lives may give him some knowledge” the elder sister said to younger one.to our fortune, tonight is a new moon and if I wear white clothes and roam near the bay, considering me as a stork he shoots me dead. will you continue to live and take care of our father for the rest of life, she said with dimmed eyes and rolling tears. Then the younger sister with a heavy heart expressed, as you are elder should take the inheritance of this and live with our father. Please be the one to live and let me end up my life. 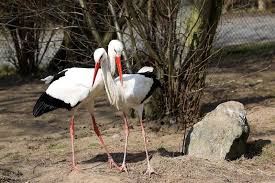 Thus both were unwilling to one another. The elder one put on the clothes rushed out of the house without further argument. The younger not to take the position, wore a white frock followed her sister. Quarrelling between who should die in the way they reached the bay.

By then his father was out for the storks looking at the white robe and thinking that it is a stock, shot the gun which pierced the ribs of the elder of the two. There, holding her sister’s body the younger one is in a helpless situation. The father to his surprise-released another shot at the other one thinking why it hasn’t flown after the first shot. The bullet pierced the chest of the second daughter made her fell on the grass. Alas! What a pity situation

The father upon success rushed to the spot to take away the storks but rather seen his daughters taking last breathe. They told to his father, “our intention is to let you know the sin in taking lives” and they died.

In deep grief, the father carried the bodies back home. As there was left nothing to do anymore, held a funeral. From that moment on. He changed completely. He built a small hut with the branches at the end of the village, where he held the memorials of his daughters and started following the principles of Buddha.