Sushi is one of the oldest and popular dishes in Japan and also widely enjoyed in countries around the world. Sushi is now a worldwide cuisine with sushi bars and fast food sushi restaurants are throughout the world.

Sushi comes from a Japanese word meaning "sour rice," and it's the main ingredient of sushi, even though many think of it as raw fish. In fact, it's the word sashimi that refers to a piece of raw fish. When you eat sushi, you might eat cooked egg and rice, avocado and rice, or cooked fish and rice, as well as sushi made with raw fish and rice.

Vinegar, which is indispensable to sushi, was first made in Mesopotamia, around 5000 years BC. Rice vinegar processing came over from China to Japan around the 4th or 5th centuries together with wine-making. Rice vinegar, such as the widely available Mizkan Rice Vinegar, first came to the Izumi region, south of Osaka, and Izumi vinegar, as it was known, was made until the Edo period. During the Heian period, the Japanese also made wine and fruit vinegar. Sushi sprinkled with sake or rice vinegar had been in existence for a long time, but because making narezushi was a lengthy process, in the Edo period, people began to make vinegar from the lees of sake. Mixed in with rice, this became a popular dish, and thus spread the custom of sprinkling vinegar on rice to make nigirizushi. The modern-day concept of sushi was invented in Japan by Hanaya Yohei sometime around the end of the Edo period sometime in the mid-1800s.

Sushi Originated Outside of Japan. Although the Japanese get full credit for what we call sushi today, the inspiration for sushi is thought to have started in Southeast Asia. Narezushi, a fermented fish wrapped in sour rice, originated somewhere around the Mekong River before spreading into China and later Japan. Funazushi is a rare type of narezushi prepared near Lake Biwa, Shiga Prefecture. Eighteen generations of the Kitamura family have been preparing the dish at Kitashina since 1619. Fresh fauna is scaled and gutted through their gills keeping the body (and always the roe) of the fish intact. The fish are then packed with salt and aged for a year before being repacked annually in fermented rice for up to four years. The resulting fermented dish may be served sliced thin or used as an ingredient in other dishes. Authentic funazushi is made from a wild subspecies of goldfish called nigorobuna (a wild type of goldfish) endemic to the lake. There are many types of sushi such as

Chirashizushi is a bowl of sushi rice with raw fish and vegetables on top. In some cases, certain seafood such as prawns are cooked and served. It is commonly eaten because of its filling, fast and easy to make. it is generally eaten in Hinamatsuri. Inarizushi is a pouch of fried tofu typically filled with sushi rice alone. There is a tale for this sushi it says inarizushi is named after the Shinto god Inari. Foxes, messengers of Inari, are believed to have a fondness for fried tofu, and an inarizushi has pointed corners which resembles fox ears.

narezushi is a traditional form of fermented sushi. Generally, the fish is skinned and gutted fish are stuffed with salt, placed in a wooden barrel. After six months this sushi can be eaten. 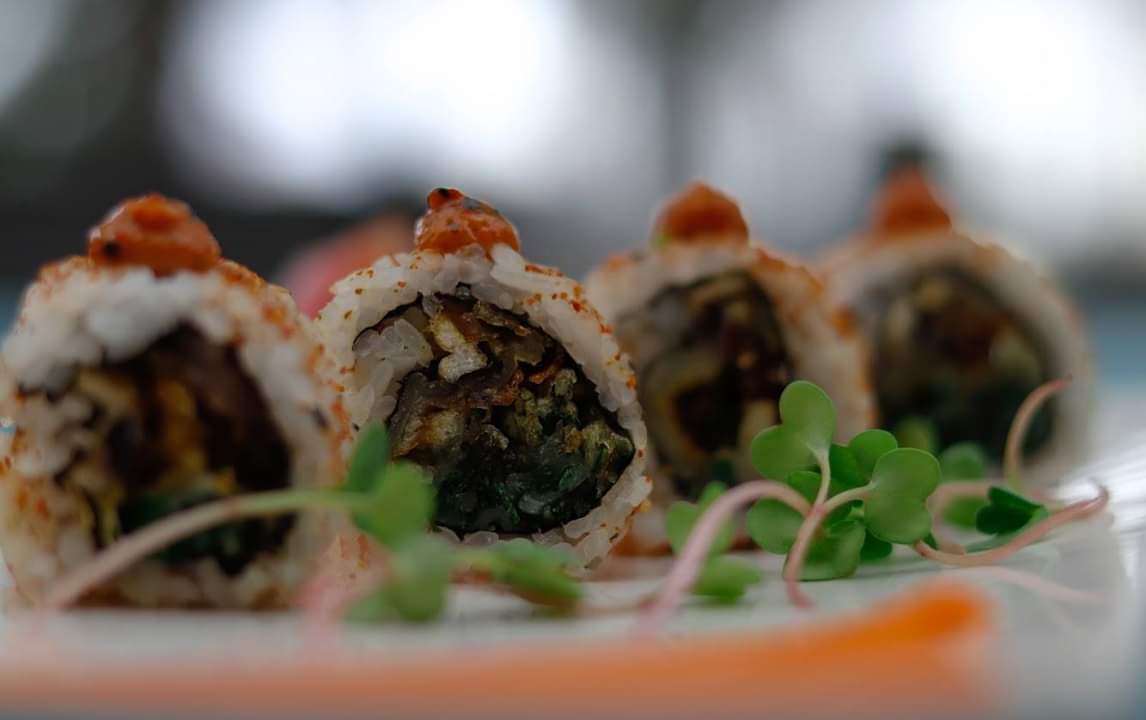 Nigirizushi are hand-pressed sushi consist of sushi rice which is pressed against the palms and then garnished with wasabi(Japanese horseradish), neta(fishes such as tuna, salmon or other seafood ). Some of the most common toppings are tako(octopus), unagi(freshwater eel), ika(squid), Tamago(egg).

oshizushi is pressed sushi also known as hako-zushi(box sushi) is from Kansai region a favourite and speciality of Osaka. A wooden mould box is used to make this sushi. In oshizushi, all the ingredients are either cooked or cured and raw fish is never used in it. 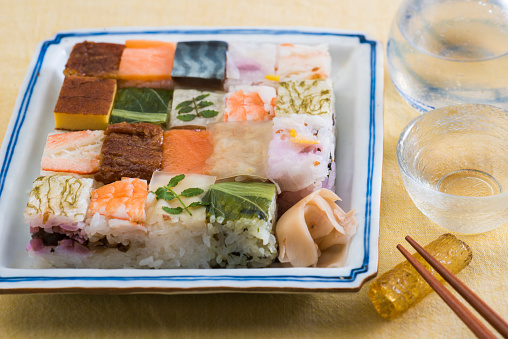 As traditional sushi comes with different kind of seafood, and vegetables which contains vitamins, minerals and carbohydrates (in rice) which helps to maintain your health. Since lots of seafood is used in it many of them contain omega fatty acid which helps to prevent cardiovascular disease and also act as natural anti-inflammatory compounds. Sushi also has high sodium content, especially from soy sauce. As there are lots of benefits of eating sushi there is also a risk of eating it. The large fishes which are used in it generally bluefin tuna contains a high level of methylmercury which can lead to mercury poisoning when consumed in large quantity.