Omurice (Japanese pronunciation) means omelette and rice in Japanese, is one of the examples of yoshoku(refers to western-influenced cooking) and it is one of the most popular among children's. though the elder's also like it most. let's discover more of it.

Omurice is a fusion of western omelette and Asian fried rice with the ketchup or sauce. omurice comes with fried rice rolled up with a fluffy omelette. It is the most popular dish among children and Japanese people also cook in there home though making an omelette is a little bit tricky. It can be easily found in many western food diners in Japan. It is also called as okosama-ranchi (children's meal).

Basically the first fried rice is prepared with chicken or beef or pork and also vegetables with salt, pepper and some sauce in it, sometimes the ingredients vary to prepare fried rice. Generally, most of the people find an alternative to use leftover rice with this dish. And then soft liquidy fluffy omelette is arranged on top of the fried rice. Sometimes the fried rice is replaced with noodles called omusoba. 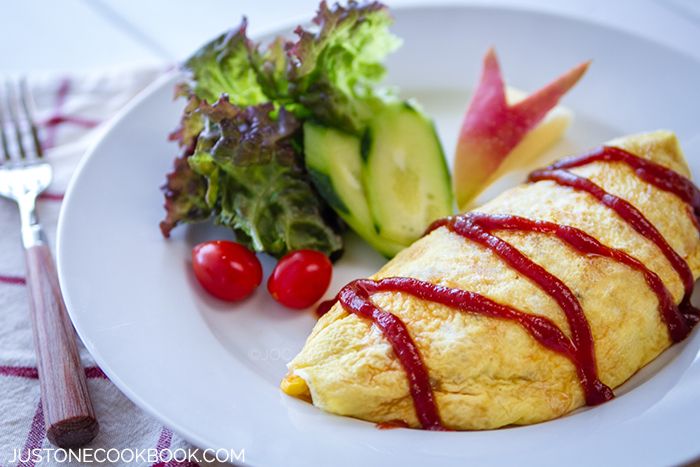 It is said that omurice has originated in the 20th century with the club of western and Asian style in Tokyo's Ginza district. Later on, the dish was passed to other Asian countries such as Korea and Taiwan. A similar kind of dish exist in Malaysia, Indonesia and Singapore called "nasi goreng pattava".

Let's short out the recipe of omurice and make things simple,

2.       Heat up the oil in a non-stick pan and saute the onions until soften

3.       Add small chicken or your desired meat (typically chicken is used) and saute it with salt and pepper

4.       Add your favourite vegetables and rice

9.       Shift the omelette on top of the fried rice, here we go your omurice is all set and good to eat.

let's make it easier Recently I have gone through one youtube video in which one chef professional in making omurice demonstrating the procedure of omurice ill put the video below so that it will be more clear to understand the dish.