katsuobushi is a traditional way of dried fish which is responsible for the authentic taste and flavour of Japanese cuisine. let's focus some of the information

Katsuobushi is nothing but a dried, smoked and fermented fish. The flavours which come out of the using of katsuobushi is the backbone of traditional Japanese cooking. It is so hard that it can’t be used directly until you make thin flakes out of it by the help of shaver. It is also known as bonito flakes. It is used in almost all Japanese dishes mostly in the Japanese broth. Adding katsuobushi adds umami taste in the food which means without the presence of meat there will be a meaty flavour. As we are tending towards the modern era like other things using Katshubushi has been replaced by shortcut ways in many places, but the real way of using still holds its mark. It also holds a gunnies world record as the hardest food in the world.

How does it made, it starts with the catching of fish (skipjack tuna) or bonito fish and then cut into four pieces and then no bone remains in the piece every single bone is removed. Then the pieces are smoked for a month after smoking is over it is taken to fermentation process which takes another 6 months of time and being dried in sunlight.

After, katsuobushi is prepared it is eaten in the form of flakes in many ways some of them are on the top of okonomiyaki, takoyaki, on top of cold tofu, dashi stock and many other ways. The most important usage of katsuobushi is for the preparation of miso soup and dashi without it you will not get the traditional flavour of the miso. So it has great importance in Japanese cuisine. The flakes are obtained with the help of shaver as shown in the figure. In order to get flavours in there, soup or dashi the Japanese invented this unique way whereas in western countries they use many methods which makes things complicated and time-consuming in the preparation. 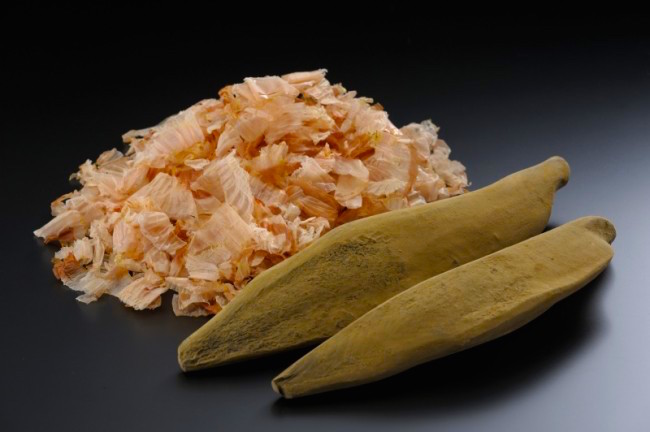 Nowadays very few peoples follow the procedure of getting flakes almost all uses readymade flakes into their dishes. The modern era has changed many things around us before 20th century the people used to have one of the shavers in order to get flakes but now everything you will get in pre shaved katsuobushi in packets almost all supermarkets. Although you will not get the authentic flavours of katsuobushi.  This may be a threat to the traditional usages of katsuobushi because pre shaved katsuobushi is easy to use and attract more peoples to use it.