Kakigori is one of the most popular desserts of japan especially found during summer, it has some interesting stories behind the origin of the name lets find out together.

Kakigori is a Japanese dessert made up of shaved ice often added with wide verities of syrups, condensed milk and some times fruits. Kaikigori is popular for strawberry, cherry, lemon, green tea, a melon flavour which can be found easily in Japan. In Japan, many shops also provide colourful varieties of kakigori. It is one of the popular desserts in summers. Same as the kakigori in India also there is shaved ice dessert called “gola”, I think every Indian knows that name and once in there life have experienced it. Kakigori is a little improved version of it with lots of syrups and its richness.

Traditionally the kakiogori is made with the help of a cranked machine to spin the frozen block of the mineral water on top of the blade to shave. Nowadays since technology comes into play they also use electrically operated shavers. The texture of kakigori will be like freshly fallen snow. It is the most appreciable dessert and often sold in festivals, streets, restaurants and coffee shops. But in summer you can find it everywhere in Japan.

There is another variety of kakigori called Shirokuma in which shaved ice along with condensed milk, small colourful mochi, fruits, sweet bean paste (usually Azuki bean), Mandarin oranges, cherries, pineapples, and raisins are often used to make shirokuma.in Japanese, the word shirokuma literally means white bear which indicates polar bear. There are some stories behind this name it is believed that once a man started his kakimori business in Kagoshima city serving kakimori with condensed milk when the owner was thinking for the name of that thing, he noticed one polar bear picture on condensed milk can since then it is named as shirokuma. Like this, there are two more stories behind the name of shirokuma. There are some other varieties of it such as Ujikintoki, Yakitori. 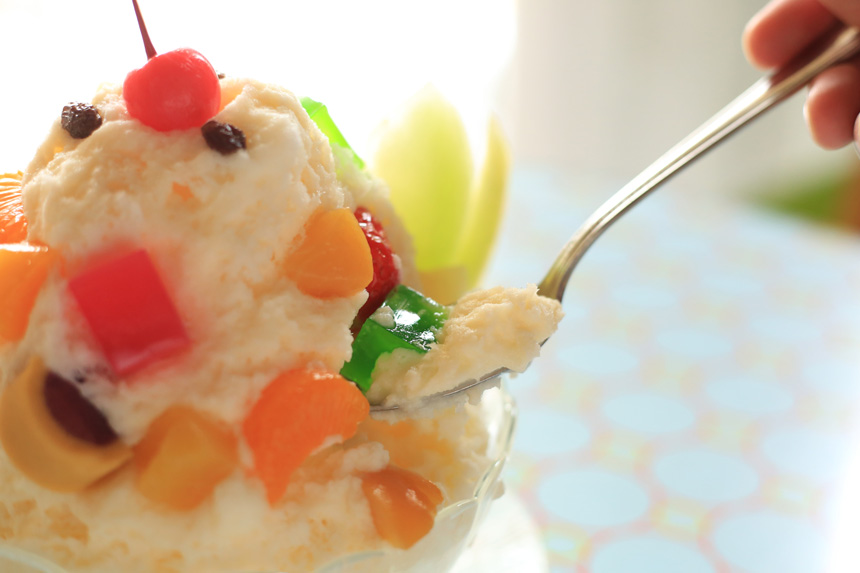 Let's see some history behind the kakigori’s popularity, it is originated in the Heian period (last period of classical Japanese history from 794 to 1185) when the ice is being shaved and served with sweet syrups to Japanese aristocracy during summer. It became more accessible in the 19th century when ice becomes available to the common man during summer. It is belied that the first kakigori store has opened in Yokohama in 1869. July 25th is known as kakigori days because it sounds like summer ice in japan when it is pronounced and another reason is also there, on that day the temperature of japan was recorded as highest temperature oh japan, since then the day is celebrated as kakogori day