Are you an alcohol lover always want to explore new varieties then this is for you, coming up with japan’s rarest alcohol “Habushu” .

Habushu is a traditional liquor made up of awamori (unique liquor from Okinawa, japan made up of long-grain Indica rice imported from Thailand with distillation method)based alcoholic beverage. Habushu comes with a poisonous snake (pit viper family) found in japan coiled inside the bottle. A bite from habu can take away your life and most commonly it leads to nausea and vomiting. A habu snake can mate up to 26hrs due to this, It is believed to be an energy and libido-boosting drink in japan. In olden days it is used to be a medicinal tonic. Nowadays it is mostly sold to the visitor's although there are some laws and acts for taking to other countries. Habushu comes with different alcohol level contains most commonly in 25%-35% and also with different herbs.

Its is quite common wondering whether it is safe to drink or not…! Yes, it is safe to drink the habushu because the snake venom is neglected by the spirit or alcohol. So next time when you visit japan give it a try or at least have a look, how does it look like.  The habushu can cost you around 8000yen for the small and cheapest bottle. 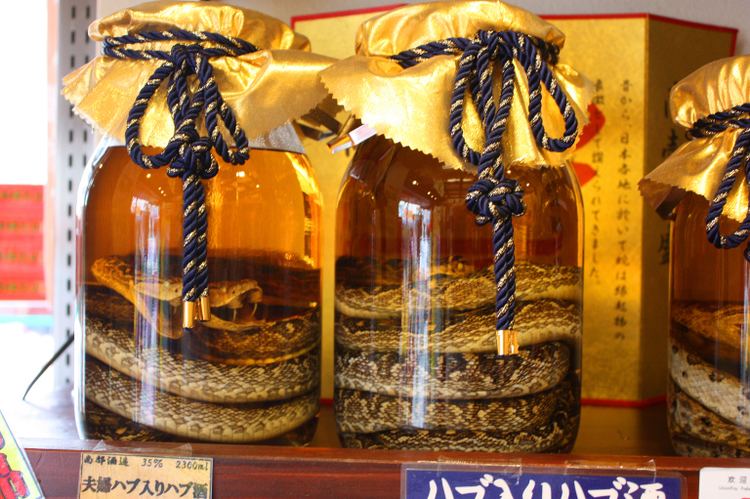 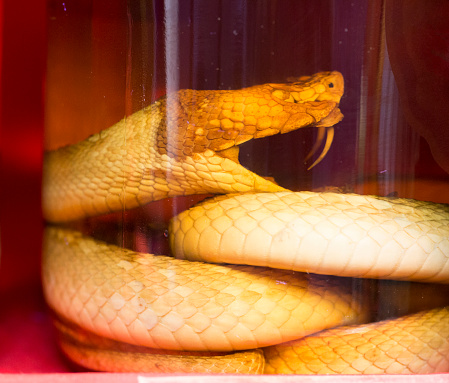 Nearly 5000 habu snakes are used per year to make habushu and for alcohol, they use crushed rice and koji to make awamori. At first different kind of herbs and honey are added to awamori to make a clear and yellow liquid. And then the viper snake is added into the bottle with special techniques. Before adding the snake into the bottle directly it undergoes some process in which it is kept in ice until it goes in hibernation and then the intestine is removed, then it will be sewn and then the snake is kept in 59% alcohol for 40 days and then it is added to 35% awamori alcohol for consumption. There are some most popular bars where you can enjoy this Okinawa’s popular drinks such as