The Most Difficult Part of Japanese while Speaking - Verb and Noun inflections.

This is yet another article on how to overcome the weak points in Japanese that arises when speaking.

Verb inflection, in other words, verb modification or is the toughest part in Japanese when it comes to speaking. In this article, let’s see some of the ways to overcome yet another hindrance in learning Japanese that worked out for me. Verb inflection or verb modification in Japanese is very complicated that the verb gets modified at numerous occasions according to the grammar point. Even if you are familiar with the verb modifications, it takes some time to conjugate as there are a lot of verbs and you have to do that in a fraction of a second.

Below are some of the inflections of the verb 行なう- to conduct. 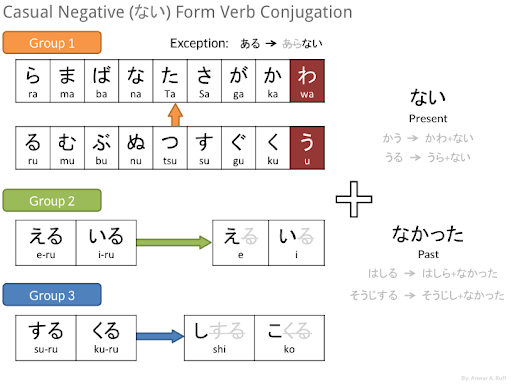 Above are only some of the inflections of the verb 行なう(to conduct) - okonau. The challenge is when you have to modify the verb at a fraction of a second while speaking. This is the part where I struggled a lot and even had some embarrassing moments. One has to be very careful on modifying the verb as it let’s the listener to know what you are trying to convey based on the modification. As Japanese is more context based, sometimes, a Japanese can understand what you are trying to convey based on the context. But this happens only a very few occasions and also with a Japanese whom you are having a conversation with for a long time.

Here the adjunct yesterday which has been added as a supplement gives them a hint that the verb should be at past tense. But this can’t be expected every time when you make mistakes. In fact, a Japanese whom you have a conversation with for the first would be totally confused with what you say as they have not got used to your word pronunciation before. They feel it very difficult to understand what you say.

Let’s take a look at some of the measures that I took to overcome this problem. I used to practice saying all the inflections of a verb. If you use a verb frequently and got used to it's inflections, then the next time when you use it, you don’t have to think much about the inflection and there is no need for you to modify the verb at the instant when you use it. For example, the verb 行く(to go). Probably you all would have been familiar with this verb and don’t have any problem in modifying this verb. That’s the knack. Familiarize all the inflections of the verb that you use frequently. It's all about practice.