How To Sound More Japanese and Make Your Muscles Flexible to Speak Japanese?

This is an article which gives you the importance of flexibility of your muscles associated with speaking and some tips for making your mouth flexible to speak Japanese that did work out for me.

Sounding like a native speaker in Japanese is not indispensable for a foreign speaker. But it could pay you off plethoric rewards if you do so. This article is all about how you can enhance your Japanese to be able to compete with a Native speaker. One has to have an insight in the Japanese language to enjoy a favourable business environment in Japan. In fact, the quality of the job that you get entrusted by the company is based on your proficiency in Japanese.

One of the simplest way to sound as a Native speaker is following up their intonations, pronunciations and use of a wide range of vocabularies. To do so, one has to obsess himself within Japanese. For those who live and work in Japan, they do not need to do any special deeds to attain a command over the language as everything that see or hear around them is in Japanese. This article best serves those who are craving for an opportunity to work in Japan being in India or outside of Japan. Let’s first look into the things that we have to do to sound like a Native speaker. 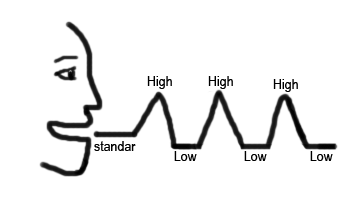 Japanese is a very sensitive language that a word with same pronunciation and spelling differs in meaning when intonation is changed. Japanese will be able to understand us based on the context that we speak though. It's one of the tools that you have to master to create an impression that you are profound in the language. Below are the importance of intonations in Japanese:

*   Questions are asked with a rising intonation.

Won't you come with us Mr. Ishida?

*   Agreement or disappointment is expressed with a fall in intonation.

Intonation also has an impact on the words. To better understand that we need to know something that is known as ‘Mora’ in Japanese.

MORA – It is a unit of sound in Japanese.

There are many such minute details to be looked after in Japanese. I had tough times in tracing out them. The only way to succeed is to watch and hear a lot of speeches of Native speakers. Below is what I did to sound more Japanese. 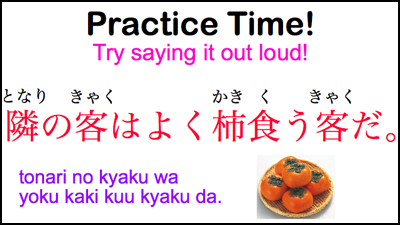 Shadowing is a very popular strategy followed by language learners around the world especially interpreters. It is a proven technique to enhance your speaking proficiency in a Language. I have just started practicing shadowing a couple of months ago. It was very hard for me at first to follow the speaker while shadowing. But later on it worked really well for me. Shadowing is a technique in which you will have to speak along with the speaker with a few milliseconds of lag. It doesn't matter even if you overlap with their voice. The first thing that I advise you to do is make your muscles associated with speaking flexible. I could really feel the difference after having started shadowing. I would like all the readers of this article to try tongue twisters in Japanese which could be an exercise for your muscles around the mouth to get it flexible to speak Japanese. Please try the below tongue twisters for the sake of reading my article.

2)  坊主が屏風に上手に坊主の絵を書いた  ----  the priest drew the picture of a priest on the screen skilfully.

I have given below the channel that I would like to recommend.

Below is the link for the Shadowing book in Japanese.

Please find below the link for the Application for Shadowing.