It’s the rainy season in Japan and not everyone is a fan of the incessant rains ☔ Let’s discover a magic trick to turn any rainy day into a sunny one!

Rains in general have a gloomy atmosphere and are not popular. In Japan the“梅雨” (Tsuyu) or the rainy season starts from the end of May to the mid July. Marked by heavy rains, occasional thunder storms, humid temperatures and the blooming hydrangeas, not everyone has a pleasant rainy season- especially when they have to travel for work or to school.  One of the fairy tales well-known in Japan about rainy days is the Teru Teru Bouzu (てるてる坊主).

The origin of Teru Teru Bouzu is quite unclear. However several accounts refer to the doll as originating from China. In Japan, the Teru Teru Bouzu has been observed from Edo Period and had several ways of praying to it- hanging it as usual, hanging it upside down or even by cutting it in half. One of the first records of the Teru Teru Bouzu had been indicated in China in Tou Dynasty (Year 618- Year 907), where the doll was based on a young girl holding a broom. The girl is popularly called as掃晴娘 (Saochinnyan) or the Cleaner girl. The tale goes; a small village in China was suffering from unstoppable rains for years. Every year the people would pray to the Rain God but to no avail. After much praying, the Rain God boomed that he would like to take the Saochinnyan as his empress. The rains stopped and the girl was nowhere to be seen. The villagers continued to hang a doll as her replacement to stop the rains every year. It is said that when you hang the doll on the window sill, the Cleaner Girl cleans the sky with her broom so that there are no rain clouds.

Other stories also revolve around the young girl who was very skilled at cutting small, beautiful dolls out of paper (Kirigami). When the village flooded with heavy rains, the girl offered her dolls and prayed to the Rain God. Impressed by her skills, the god offered her place as his empress and stopped the rains. 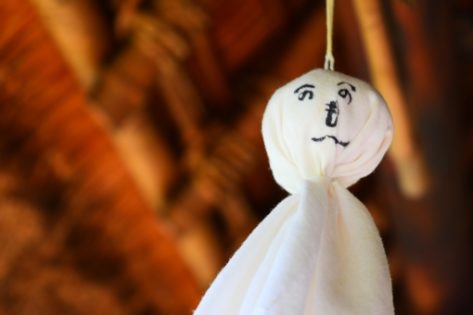 Another fable about the Teru Teru Bouzu is actually very scary! In the olden days, there was an unnamed country where it rained for many years. The citizens prayed to the Gods fervently but the rain would not stop. One day, a monk visited the country and claimed that he knew an incantation which would stop the rains. The people requested the monk and so he incanted for the rain to stop. However, it rained the next day as well. The citizens in the anger of being fooled beheaded the monk. The monk’s head was tied in a white cloth and hung outside. Next day, the rains stopped.

While the stories about the Teru Teru Bouzu are interesting and scary, the appearance of the doll reflects just a cute little figure which one can see hanging in children’s windows.

Now that we know about the origin of the Teru Teru Bouzu, let’s learn how to how to make it! Things you will need are:

-A large white cloth or handkerchief

Did you know that India has its very own Teru Teru Bouzu- the Chekutty dolls? In 2018 the state of Kerala in south India suffered from heavy losses due to floods. In Kerala, the district of Chendamangalam suffered the most because of the damage to the cloth mills. The cloth to be used as raw material was torn and soiled and could not be used to make saris (Indian traditional clothing). To raise money for reparation of the mills and equipment, the weavers made handmade dolls similar to the Teru Teru Bouzu for selling the remaining cloth. The Chekutty dolls may look dirty or soiled because of the stains from the flooding but they represent resilience, hope for the sunny future and are the mascot of emerging from difficulties.

I hope that the article was informative and you had fun reading it.