Looking for ways to cool down during summer? Look no further! Introducing the best and the easiest summer dessert~

Japan has integrated cooking styles and dishes from various countries, especially Asian and European countries, and tailored it to suit the Japanese palate. This is evident from its vast culinary space- be it Naporitan (ナポリタン), Curry（カレー）, Japanese style of Burgers, Gyoza, Nikuman, Mapo Tofu and the ever popular Ramen. Today, I shall be introducing a dessert which is well-liked and is very easy to make no matter where you live- Parfait（パフェ）. I am pretty sure that you may have seen this dessert making its appearance several times in anime, drama, variety shows, etc.

The word Parfait comes from French word Parfait meaning “Complete, Perfect” to signify a complete and perfect dessert. Usually you will see Parfait being served in tall glasses with layers of ice cream, fruit and topped with whipped cream, chocolate sauce, cereal and nuts. Traditional French Parfait has custard made with egg, sugar and whipped cream, which is then frozen and layered with fruits. UK has its own version of Parfait which includes meat and sweet liqueurs. What makes Japanese Parfait different than the traditional French Parfait is the elimination of the egg custard. The current Japanese Parfait is inspired by both French and American Parfaits and hence is made with quality ice cream and the variety of seasonal fruits and toppings. The layered presentation of the Parfait also adds to its charm.

The connection between France and Japan has been present since Tokugawa Era stretching into Edo period when Japanese government was supported by France. French artefacts, literature, Wine and Fashion has always been in vogue in Japan. During Meiji Period, many French citizens were employed by Japan, which played an important role in influencing the law-making, military, Gas industry and development of mines. Almost 40% of total comics published in France are mangas. In addition to these connections, the culinary connection to France has also been a strong point. French cooking, especially desserts have always been popular in Japan. Hence it’s no wonder that Parfait has been one of the most consumed desserts. Japan’s very first Parfait is recorded to be introduced in 1893 in the menu of “Parfait FUJIYAMA”. The prototype of the then Parfait was much different than what we see today. It imitated the French Parfait and was served on a cold plate. Soon new concept of “Fruits Para” (Fruits Parfait) was introduced. With this several other desserts with fruits as main were introduced and several experiments later, the Parfait that we see today was born. 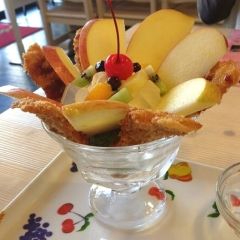 In Japan, while you can find almost any cafe having Parfait on their menu, the most well recognized places for Parfait include:

Okayama Fruits Parfait- Widely popular among ladies, the Fruits Parfait sold in Okayama is considered to be one of the top gourmet dishes. Okayama city is called as “Kingdom of Fruits” as well as “City of Parfaits”.

Matsuyama Tonkatsu Parfait- Tonkatsu is a type of pork cutlet. While we may be wondering how the pork cutlet ended up in a Parfait, it is considered to the one of the top gourmet and representative dishes. Other well-known dishes in Matsuyama City also include chocolate or custard filled Tonkatsu.

Sapporo Shime Parfait- Built on concept of “Parfait as a perfect way to end a meal”, Sapporo’s Shime Parfait has one of the most elegant and innovative menus for Parfait lovers.

But does this mean we can’t have Parfait if we are not in Japan? Not at all! Parfait can be simply made with ingredients that you can get easily as well as some which you already may have.  The main ingredients for any type of Parfait include- Ice Cream, Whipped or soft cream, Fruits and your choice of toppings. Simply layer the ice cream and fruits in a tall glass and top it up with fruits, nuts sauces, etc.  and viola~.

Fun Fact: Did you know that 28th June is the “Parfait Day”? Despite its name, the day actually has no connection with our Parfait. On 28th June 1950, famous Japanese baseball player, Hideo Fujimoto played the first “Perfect Game” in the history of pro-baseball. Hence the day was named as “Perfect Game Day”, which eventually turned into “Parfait Day”.

Thank you and see you soon~~