Let’s learn a little about school life in Japan starting right from one absolutely necessary item that all elementary and middle school kids carry- Randoseru.

Randoseru (written in Katakana as ランドセル) is a backpack used to carry textbooks, notes, lunchbox and change of uniforms by school going children in Japan usually from start of Elementary school to the end of Middle school. Mainly made of firm leather, nowadays artificial or synthetic, Randoseru is typically seen in two colours- red for girls and black for boys. General Randoseru are seen with a strap on top to hang the bag on the desk and a small hook or metal clip on the side to hang lunch box bag or P.E uniform bag.

The custom of carrying Randoseru started at the end of Meiji Period by year 1877. Before Randoseru, the students would carry their school items in Furoshiki, a type of square cloth used to wrap up items and knotted to make a handle. Gakushuuin (educational institute which was attended by elite classes and royal family) declared that schools in general should have an environment where all children feel equal, and all school items are to be carried by the children themselves. Since Gakushuuin was an elite school, many students would come to school by horse drawn carriages or have a person with them to carry their school items. But by year 1885, this action was banned with strict guidelines. In addition to this, in 1887, then crown price Emperor Taisho was given Randoseru on his first day to Gakushuin which created a wave of popularity for the backpack. Since then Randoseru has been necessary for all students. 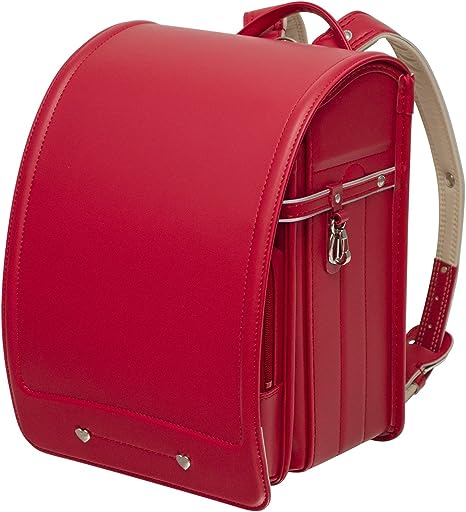 The word Randoseru comes from Dutch language word “ransel” meaning knapsack. At the end of Edo Period, ransel referred to the knapsack made of cloth used by soldiers as integrated by military organisation. The textbooks used during end of Edo Period, written in 1864 describe a backpack, similar to Randoseru with its Kanji as well. Even in Meiji Period, the military personnel would use leather made bags. Soon the use of leather or similar type of bags extended towards students. The Randoseru at the time would be made of natural leather and had aluminium frame or parts added to it and was surprisingly much smaller and easy to carry.

In recent years, Randoseru has expanded to include different variety of colours like pink, blue, brown, green and different type of patterns and styles. Although different styles of Randoseru were available since 1960, their popularity only increased after year 2000. According to several reports this is mainly because of other colours standing out too much in the school. However by 2000’s, having a unique coloured bag had become a norm. Even today, Randoseru are made with only limited use of machines for cutting the pieces and relies heavily on manpower for making details, assembly and polishing work and requires use of more than 100 parts to make one bag. 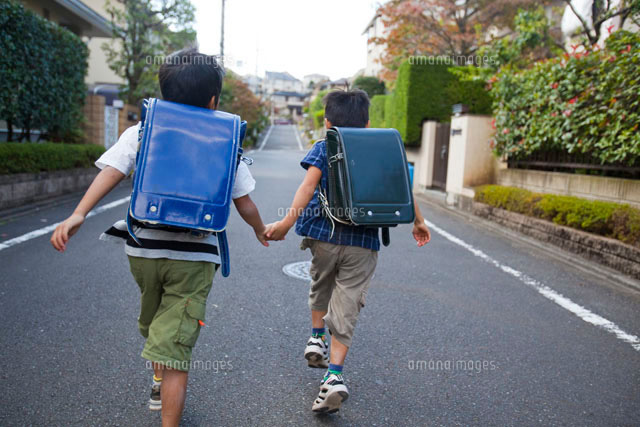 The main merit of using Randoseru is that students are able to use good quality backpack with minimum wear and tear and capability to safely carry all the school items for almost 6 years. Since Randoseru are made with high quality firm leather and straps that distribute the weight evenly without causing pressure only on the shoulders, they are easier to carry than regular knapsacks. Randoseru also has cushioning on the backside of the bag which makes it safer than other general bags. Several schools also provide and make it compulsory for the students to have a bright yellow rain cover over the bags which would be visible during rains as part of traffic safety.

However, Randoseru is not without its demerits. The base material and the metal parts of the bag make it heavier than other usual bags. Hence there has been steady demand for lighter Randoseru among parents of the students. With the change in educational system and type of textbooks, notes and other material to be taken to school, several changes have been made officially in the size of the bag as well. Newer and smaller variation of Randoseru known as “Nappurando” has been introduced for younger students. Not only is it small in size but also water proof to prevent damage by accident among children. Another type of bag that students can carry when having fewer classes or when they go to coaching school is “Jyukubaggu”.

Coming to the present day, with the declining number of children in Japan, the Randoseru business has been waning. There is no official decree or rule regarding use of Randoseru in Japan, however since Randoseru is considered to be natural choice when students first enter the school, the high price of the product makes the increase in sale to be little difficult. According to several experts, in coming years people may have increased alternatives from which they have option of choosing between other types of bags and Randoseru. I hope that in future many companies can introduce more affordable and functional Randoseru that are easily available to students.

I hope I was abe to introduce Randoseru in variety of aspects and hope that the article was interesting.