Do you know that there’s more to writing in Japanese language than just Hiragana, Katakana and Kanji? Let’s learn a little about not so well-known grammatical parts of writing.

During the beginning stage of learning Japanese, majority of students learn Hiragana and Katakana as their base with Kanji making its appearance as the level of understanding and fluency in the language increases. If we read about the Japanese writing system, we would see the system differs from other languages in many aspects- the use of three scripts, vertical writing system known as Tategaki, change in punctuation rules, etc. Another aspect that is unique to Japanese and other languages which have Kanji or other similar character system is the repetition of characters in a single word. This is known as Iteration.

Odoriji are symbols that represent the recurring sound of previous characters (Kana or Kanji) in writing. As Odoriji appear more frequently with Kanji in modern Japanese writing, many learners may confuse Odoriji as part of Kanji system. However, Odoriji are neither part of the Kana system (Hiragana and Katakana) nor Kanji, but can be somewhat described as being similar to the punctuation marks.

The use of Odoriji can be traced back to the Yin dynasty in 1600 BC where it would be utilized to avoid writing of same Kanji characters again and again. To show the repetition of a sound, a symbol would be used in place of the second character. The records from Yin dynasty note that a symbol similar to modern day “equal to” sign (=) would be used to indicate iteration. Since then, Odoriji have changed their appearance with the evolution in language. Odoriji are also called as “Kurikaeshi Fugou” (Iterated Symbols), “Okuriji”, “Yusuriji”, etc.

Let’s discuss the main types of Odoriji you may observe in old texts:

2) ゞ: Shows repetition of same Hiragana character with the following character shall have voiced consonant marks.

3) ヽ: Shows iteration of the Katakana characters in a word.

4) ヾ: Shows iteration of Katakana characters when the following character is voiced consonant character (I.e. has a " mark). Katakana being used to write foreign loan words exclusively, has very few references in old texts. Hence it is difficult to find example words for this symbol. However, lately this symbol is known is used to indicate a "waving hand" in Kaomoji (a type of emoji)- ヾ(•ω• )

5) 〻：Shaped like symbol of number “2”from Yin dynasty, this iteration mark is called as Yuzuriten. Seen usually in vertical style of writing (Tategaki), the 〻actually indicated repetition of the reading of Kanji rather than the repetition of Kanji itself. 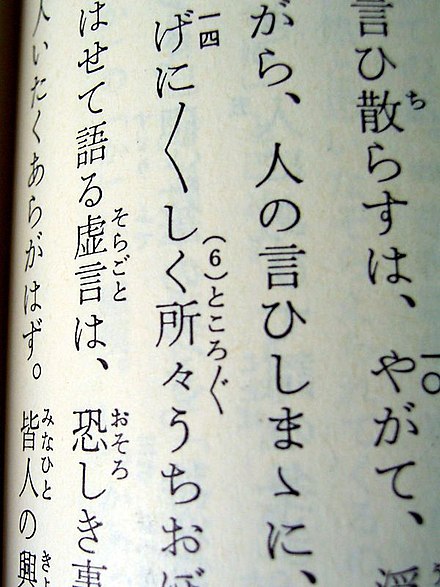 Another version of the iteration marks mentioned above includes the 〴, indicating the repetition of voiced consonant word.

Nowadays in modern Japanese language, we rarely see use of variety of Odoriji. The most used iteration mark, often with Kanji is the 々. Shaped similar to Katakana マ (MA), it is fairly common to see this symbol being interpreted as Kanji.  Other than Japanese language, other languages that have recorded use of Repetition mark include Chinese, Taiwanese and Korean which has its own version of iteration mark.

Although the intricacies of the Japanese grammar may be difficult to understand if one does not know enough Kana or basic grammar rules, however reading about old (in some cases extinct) style of Japanese writing system shall help us keep these traditions up and alive.

Thank you for reading and see you soon!