I am sure this sound is very familiar to everyone. Frogs are what we learnt in school as one of typical example of an amphibian. We usually find them near water bodies, trees and can listen to them when it’s about to rain or in rainy season. Today I shall be attempting to write about frogs in Japanese culture and why we should probably own a frog shaped purse or two… 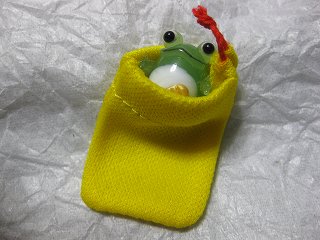 Frog in Japanese is called as Ka-e-ru (written as カエル、蛙).  The influence of frogs as lucky animals is believed to have come from China, where frogs are considered to bring good fortune and prosperity. These are called as Feng Shui frogs and are three legged, usually sitting with old Chinese coin in their mouth or on a bed of coins.

In Japanese culture frogs are considered to be auspicious. This is because the word Kaeru actually is a homonym, with its second meaning; “To return”.

Based on this, it was believed that keeping a frog related item in your wallet will bring good fortune.  Okane ga kaeru (お金がかえる: The money will return) was one of the phrases used in this superstition. In olden days, people would keep a small frog amulet or symbol in their purse. The idea is that the lucky frog will make sure that whatever money you spend shall return to you.

In modern day, you may see small and adorable frog shaped coin purses or cute frog cell phone / bag strap accessories which are useful and not so much of a stand out.

Since “Return” can also mean returning from a journey, in olden times people would carry frog amulets or frog Omamori (Omamori literally means protector) with them when they would travel. This was believed to ensure the safe return of the traveller.

Did you know that frogs have been used as a subject for one of the most well-known and representative haiku of all time?  The most famous poet of Edo Period and master in haiku, Basho wrote a piece about frogs, which became instantly famous among the poets in Edo period and inspired several other poets to write haiku about similar subjects. You may find this particular piece as the very first search result when you search for haiku-

水の音 (Mizu no oto) sound of the water

Not only haiku, frogs were also a popular subject for Ukiyoe paintings. Among them are works by great master of Ukiyoe paintings, Utagawa Kuniyoshi. Another one of the great painters, Kawanabe Kyosai was also known to be fond of frogs and included frogs in several of his paintings. His works were known to have humour and depicted animals doing mundane human actions. 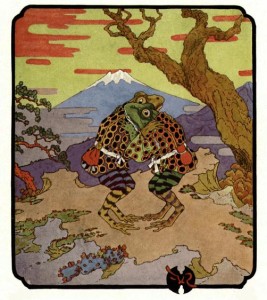 There are several Japanese folk tales around frogs as well; the most popular being the “The two frogs”. The tale describes the two frogs (one living near Osaka and one living in Kyoto) who decide to see the other side of the world by travelling to other places in Japan. They end up meeting each other on a hill and decide to have a look at each other’s city from the hill. I shall avoid giving spoilers but the story mirrors Aesop tales where it has a moral in the end.

Kaeru no Uta (カエルの歌: Song of the frog) is also a popular choice of song in schools. Because of the easy to follow and clear tone of the song, elementary schools frequently use this song with the students to practise their instruments or as group singing project. But as all children’s songs, it is highly addictive and you may find yourself humming the tune in no time!

Although frogs are generally slimy and usually not so pleasant to look at, one of the unlikeliest places where you can find frogs is probably in anime and movies. Frog characters are popular in general due to their adorably drawn features by the artists. In Ghibli movie “Spirited Away”, you will be surprised to find the Aogaeru (blue frog) working in the bathhouse shown in the movie. Not only Ghibli Films, several animes have also seen frogs as the main characters; the most well-known being the Kero Kero Keroppi. The character of Keroppi is a mascot, has released albums and has a Nintendo game based on the anime. I am sure you may have seen Keroppi goods without even knowing the name of the characters!

Similar to Keroppi but on the chaotic side of the spectrum is the anime “Sergeant Keroro”; where frog like alien creatures invades Earth. Other side characters such as Gamakichi from Naruto or Yokozuna from One Piece also have their own tiny fan following. 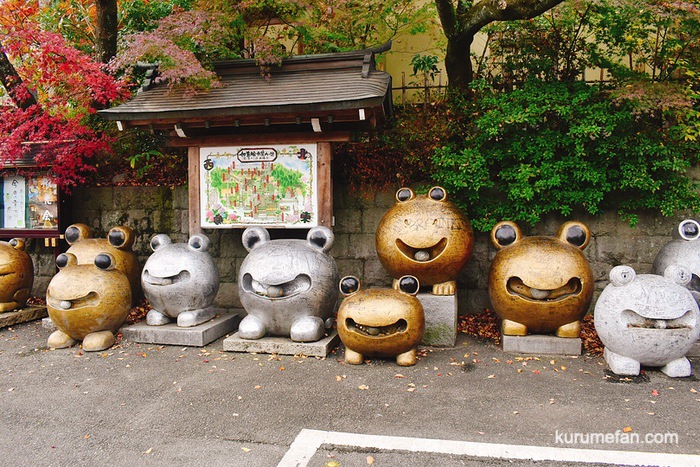 Did you know that there is a shrine dedicated completely to the frogs? The Nyoirin-Ji shrine located in Fukuoka Prefecture is also popularly called as Kaeru Dera (Temple of frogs). Right from the entrance of the temple with a giant frog extending his hand for a shake to a frog with large mouth for you to pass through it for good luck- the temple is home to hundreds of frog figurines. The story goes that the owner of the temple went to China for a trip and displayed a jade frog figurine that he bought from China as souvenir. The visitors at the shrine mistook the figurine as part of shrine and started offering frog related items. Although not originally intended, you can buy lucky frog items from the shrine including an “Okane ga kaeru” Omamori.

I hope you found reading about frogs as enjoyable as I did while studying this topic. Although I am not so fond of frogs, I found information about them really interesting.

Thank you for reading. See you!