Futon are an indispensable part of Japanese culture. One simply cannot imagine a Japanese style house without the futon. Let’s learn a little about Futon, its history, how it is made and the rather surprising connection to India.

Futon, written as 布団 (ふとん) is one of the main and well-known types of bedding used in Japan since many decades. A futon has two main components- the Shiki Buton which is the bedding on which a person lays down and the Kake Buton, which is used as the blanket. The use of futon has many advantages- the soft but firm making of futon helps in maintaining sleeping posture that is comfortable; it helps in maintaining body temperature even in winters, can be used on tatami mats and kept folded so that the room can remain clutter free and clean.

Did you know that futon are only supposed to be laid when its night time and put back in closet in the morning? Keeping futon out in the room all day is known as Mannendoko and seen as mark of unclean personality. Many will hang futon out in the sun every few days to remove the smell and air it out. Nowadays you can get dehumidifiers, dyers and cleaning machines especially for the futons.

Don’t we have an image that Futon must have been used in Japan since ancient times? Surprisingly, in the early Jomon Period to Yayoi Period, Japanese people would use a bed like structure called as Mushiro (むしろ) made with dried woven grass in place of the Shiki Buton. The Kake Buton was called as Fusuma (ふすま) made with hemp or silk. By Nara and Heian Period, the rich and high position holders would construct a raised bed like structure called as Mitoko. A type of Tatami known as Gojyounotatami would be used as Shikibuton on the Mitoko. During the Muromachi Period, even the royals and rich people also began to use tatami as bedding. For the Kake Buton many would use their day use Kimono. Since people in those days would wear multiple layers of clothes, their day clothes could be used as blanket at night. You may see this phenomenon in old Japanese movies. 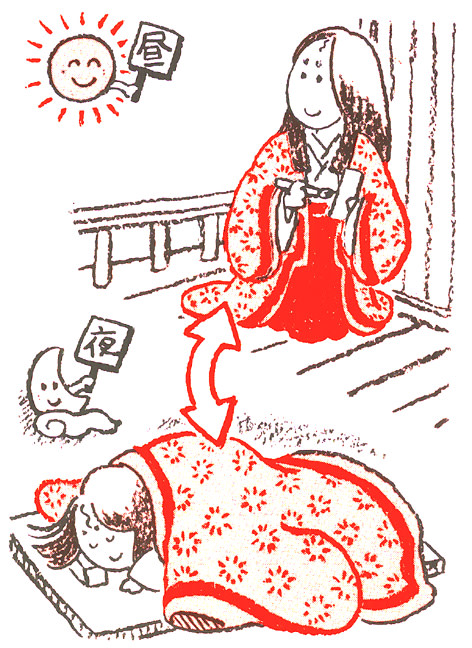 As we entered the Edo Period, cotton became available all over Japan and by second half of 17th century royal, rich and the common people would use cotton woven into squares as bedding. Yogi, kimono made especially made to be used as Kake Buton was stitched. Yogi was made to have wider shoulder and sleeves and would also be stuffed with cotton to help make it warm enough for use in winters as well. Royal families would often use elaborate and intricately designed Yogi. Soon variety of Yogi and prototypes of futon came in the market due to increased produce and trade of cotton. However both yogi and futon were still exclusively used by people having financial power while average citizens could not avail these types of beddings. You could compare price of a futon in those days to price of a brand new car today! Common people would use futon made out of Washi or traditional Japanese paper. In the final years of Edo Period, the addition of sleeves or collar for shoulder was stopped and futon finally became square in shape.

Did you know that the disperse of the futon actually has a surprising connection to India as well? In Meiji Period, the import of cotton was gaining speed with the trade route running from Shiga Prefecture to Yokohama and finally to Kobe in Oosaka Prefecture. Even with existence of Japan’s Spinners Association, it was difficult to catch up to the demand only by local production. In 1889, representative of Ministry of external affairs travelled to India for starting import of Indian cotton. Not only this opened a new trade route but also established a contact between Ministry of External Affairs in Japan and the Bombay cotton as introduced by Bombay Tata.

Now that we have come to know about history of Futon, let’s learn how it’s made. First, the cloth that would be used as the outer layer of the futon is cut and sewn into square pocket like shape. Sheets of spun cotton are prepared to be stuffed into the pocket. The cloth for the pocket is laid inside out on the ground and the spun cotton sheets are laid on it one by one. Usually 4 sheets make up a single futon. The sheets are then folded into same measurement as the cloth pocket and the corner of the sheet is tucked in carefully to avoid fraying. The cotton pocket and the sheet are rolled and pocket is turned right side out so that the cotton sheets are now stuffed in pocket. The corners are turned out carefully to have clear and sharp edges. The opening of the pocket is sewn close.  Anchors are sewn at regular intervals in the futon so that the sheets inside and the cloth outside will not separate. Lastly brand name and other particulars are sewn to make the final product.

While futon is only one type of bedding found in Japanese culture, it is one of the aspects of Japan which we see quite often in Japanese anime and dramas. I hope the article was a good read and informative about futon.